Tricky course conditions at the legendary Bonneville Salt Flats have once again proved challenging during the latest stage of the Triumph Motorcycles Land Speed Record attempt.  With clear sun and virtually no wind, rider Guy Martin set off from mile marker 9 to record his FIM-required certification run.

Setting off smoothly, Guy was making good power in mile one when the Triumph Infor Rocket Streamliner lost traction on a damp section of the salt surface, causing the rear of the machine to step out of line and the streamliner to go down on the course. Guy was completely uninjured in the incident, however the streamliner will now require a full inspection before any further runs can take place.

“It’s one of the challenges of Land speed racing - the salt surface can be so unpredictable. We’ll fully inspect the streamliner and get ready for the next phase of our attempt” commented Triumph Infor Rocket Streamliner designer Matt Markstaller.

Rider Guy Martin added “It’s all part the job boy, isn’t it? Feeling our way. I guess if it was an easy thing to do everyone would have done it by now.  So we’ll get a plan sorted and get on with the next go at it as soon as we get the chance.”

The last few weeks have seen the team begin final preparations for the Land Speed Record attempt, following its successful practice runs at Bonneville at the beginning of August. The practice week saw TT Legend Guy Martin get acquainted with the Triumph Infor Rocket Streamliner on the salt for the first time. Throughout the week, Guy and the Streamliner performed excellently and the test week came to an end with Guy setting a new Triumph record of 274.1 MPH, to become the fastest ever Triumph Motorcycle.

Pleased with the week’s work, Matt Markstaller, lead designer and crew chief of the Triumph Infor Rocket Streamliner, and his team, undertook the sixteen hour trip home from Bonneville to the team’s base in Portland, Oregon to begin final preparations.

Even though the Streamliner had only covered approximately 20 miles on the salt during the week, the first job that faced the team was the mammoth task of cleaning the entire vehicle. This is a very time consuming task, that takes the team an entire week to complete. During this time the Streamliner is cleaned up to four times, to remove the salt collected during each high speed run where it forces its way into each and every component.

Following the mammoth job of cleaning the Streamliner, the next task that faced the team was to begin removing and inspecting the major components. This process saw the team remove the engines to conduct a series of visual and mechanical checks.

During the engine inspection, the oil and filters are changed and a visual check is conducted for any wear or visible signs of stress points on both engines. With this complete, the engines were sent to the dyno to carry out a series of power simulations to re-check each unit’s performance and make sure everything is OK with the motors.

While the engines have been on the dyno, the rest of the team inspected the monocoque, suspension and drive train components. Each part has to be meticulously checked for any signs of wear or stress and then serviced and lubricated, before being refitted to the Streamliner.

The time back at their base in Portland was also used to change the specialist Goodyear Land Speed tyres. While normally a simple process on a road motorcycle, the process on the streamline involves 200 screws being removed and the wheel stripped, down before the tyre can be changed. The whole process is then reversed and, before both wheels are refitted to the bike, they are sent away to be checked to ensure they are balanced correctly and are structurally sound.

Due to the high speed the tyres need specialist preparation and testing. To do this, the team has to send the wheels and tyres to a specialist testing facility. This facility, is the only place in the USA that can undertake testing over 400 MPH and underload to ensure can cope with the stresses placed on them during the record runs.

With just a week remaining before heading back to salt final components are being refitted, the trailer is being packed and the Triumph Infor Rocket Streamliner is being loaded for the 16 hour return journey to the salt.

Piloted by TT star Guy Martin the Triumph Infor Rocket Streamliner will return to the famous Bonneville salt flats and attempt to beat the current 376.8mph record speed on an 11 mile-long course. Despite having a good course surface for testing the team felt that the salt wasn’t yet fully capable of supporting a top-speed streamliner run. In consultation with FIM course manager Mike Cook the team are targeting the September dates as the best possible opportunity for the optimal course conditions required for the record attempt.

When asked about returning in September Markstaller commented: “We achieved a great deal during our test week at Bonneville and feel we are in a great position to move ahead with our record attempt. Guy settled into the streamliner very quickly and impressed us with the speed in which he mastered both the motorcycle and riding on the salt.

“While conditions were some of the best I have seen over the last few years, we feel there is still some room for improvement. When chasing a record such as this on two wheels the conditions have to be the very best they can be, to give us the greatest chance of achieving the speeds we require to set a new record. We feel that waiting a few further weeks will provide us with even better conditions and put us in the ideal position to make our record attempt.”

Now Triumph has teamed up with Matt Markstaller and Bob Carpenter and pulled together a team to restore Triumph Motorcycles’ legacy in land speed racing. Markstaller serves as aerodynamic engineer; Carpenter is the high-peformance engine builder; Riding the purpose-built Triumph Infor Rocket Streamliner over the measured mile will be Isle of Man TT racer and multiple speed record holder Guy Martin. This multi-national team converges on the Bonneville Salt Flats, a 40 square mile salt pan in northwestern Utah, with the goal of a 400 mph plus record-breaking run.

The Triumph Infor Rocket Streamliner has become the world’s fastest ever Triumph by achieving a speed of 274.2 mph at the Bonneville Salt Flats on 8 August, 2016. Piloted by TT legend Guy Martin, the streamliner smashed the previous official Triumph record that stood at 245.667 mph as well as the unofficial Triumph Record of 264mph, both set by Bob Leppan, in the Gyronaut X-1.

Visit our Full Desktop site to find out more. 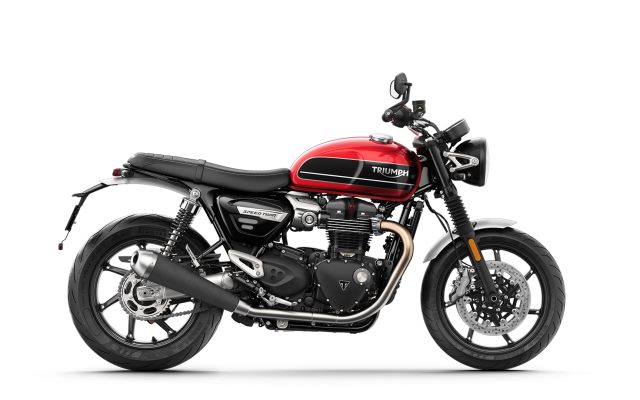